ANAHEIM, CALIF. – The power play snapped out of its funk, more players contributed on offense and goaltending has stabilized the entire operation.

After shrugging off the Ducks 3-2 on Wednesday night at Honda Center, the Wild had plenty of reasons to crown its season-opening road trip a success — none more than the number of points it accrued, bringing six out of a possible eight back to Minnesota.

Next up is the Wild's home opener at Xcel Energy Center on Friday against San Jose.

"It's nice to get rewarded and feel good and hopefully carry that momentum forward," coach Dean Evason said.

Nick Bonino lifted the power play out of a 0-for-18 rut with his first goal of the season, Joel Eriksson Ek continued his impressive start by scoring the game-winner and goalie Kaapo Kahkonen racked up 22 saves in his first start of the season.

And with the boost up the standings, the Wild (3-1) continues to jostle with the division leaders in the West — an early snapshot but one that could be difficult to repair if a team falls too far behind in this season's rivalry-based schedule.

"Makes you feel good about your game," Eriksson Ek said.

Tied at 2, and after a timid second period, the Wild had a forceful start to the third.

Only 1 minute, 53 seconds in, rookie Kirill Kaprizov passed to Jordan Green­way and he found Eriksson Ek for a top-shelf shot past Anaheim goalie Ryan Miller that put the Wild up for good. Miller made 29 saves.

The assist was Kaprizov's team-high fifth point of the season and Greenway's third.

As for the goal, it was Eriksson Ek's second in four games and capped off a two-point night after he also assisted on the Wild's lone power-play goal during a rare appearance by him on the man advantage.

"Just trying to be smart, make the right plays [and] don't force anything," said Eriksson Ek, whose line with Greenway and Marcus Foligno has scored a key third-period goal in each Wild victory.

Before the power play resurrected itself, the other half of special teams showed how it's done.

On the penalty kill in the first period, Ryan Hartman poked a puck free at the blue line to skate in alone on Miller and although he blocked the first attempt, Hartman wired in the rebound at 13:51 to open the scoring.

The goal was Hartman's first career shorthanded goal and the first of its kind this season for the Wild, which had only three shorthanded markers in 2019-20.

"I surprised him a little bit how early I did shoot it," Hartman said. "He was pretty far out of the net."

Then, on its third opportunity of the game, the Wild power play finally capitalized. And after many minutes of well-executed choreography without any finish, the Wild pounced on a broken play with Bonino one-timing a bouncing puck off a faceoff at 5:50 of the second period.

"We just stayed the course," Evason said. "The guys haven't panicked. We just continued to grind away and continue to get looks."

After only six shots in the first, Anaheim more than doubled that in the second — scoring twice on 13 shots.

The first tally came at 8:58 when Nicolas Deslauriers put back a rebound and by 12:21, the score was knotted at 2 once Cam Fowler finished off a 2-on-1 rush.

Overall, the Ducks went on a 9-0 run in shots to close out the period but Kahkonen kept them for moving ahead. He was especially effective during an Anaheim power play late in the second, stopping three shots. The Ducks ended up 0-for-2 with the man advantage, while the Wild went 1-for-4.

"Every year, the first game you play, it's a bit of a battle," said Kahkonen, who had a last-minute save against Ryan Getzlaf to preserve the Wild's lead. "You just have to kinda fight through it in a way. But it's always great to win a game, and the guys did a great job." 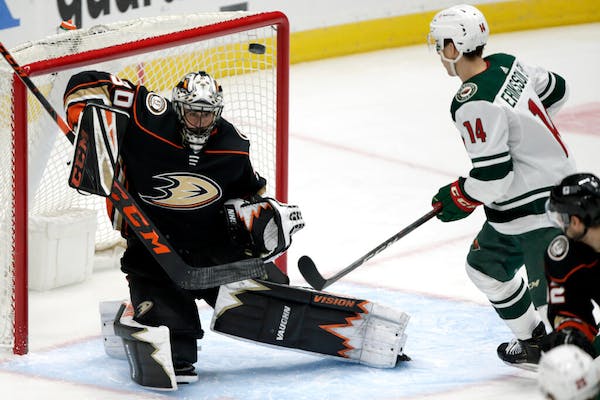 The Wild finished its season-opening four-game road trip at 3-1 and in each of those victories, the third line contributed a vital third-period goal.

Sarah McLellan covers the Wild and NHL. Before joining the Star Tribune in November 2017, she spent five years covering the Coyotes for The Arizona Republic.

Wild's Foligno much more than a role player now