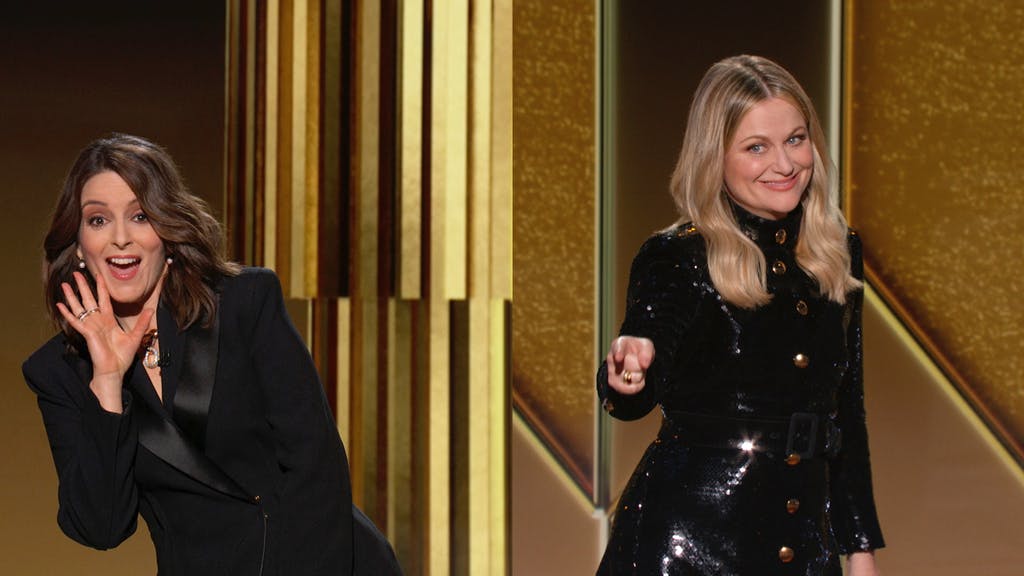 With homebound nominees appearing by remote video and hosts Tina Fey and Amy Poehler on different sides of the country, a very socially distanced 78th Golden Globe Awards trudged on in the midst of the pandemic and amid a storm of criticism for the Hollywood Foreign Press Association, with top awards going to "Nomadland," "Borat Subsequent Moviefilm," "The Crown" and "Schitt's Creek."

The glam was back at the Golden Globes, albeit at a distance

Glam was back for the Golden Globes virtual, bicoastal awards night Sunday as nominees Zoomed in from around the world and, for Leslie Odom Jr., from his front porch in Los Angeles not far from the action in Beverly Hills.

Prince Harry says the process of separating from royal life has been very difficult for him and his wife, Meghan.

All about 'Soul': Pete Docter was an early winner at Golden Globes

The Globes often serve as a signal as to who might wind up with a more coveted Oscar nomination.

The fedora Humphrey Bogart wore in "Casablanca" may have secured Borsalino's place in fashion and cinematic history, but it will be something like the cow-print bucket hat that will help ensure its future.

Globes org says it will recruit Black members after outcry

The organization hosting the Golden Globes says it is developing a plan to recruit Black members after falling under sharp criticism for lacking diverse members.

With short, sure strokes of a flathead ax, firefighter Cole Gomoll methodically chopped along the edge of the SUV's broken windshield as golf icon Tiger Woods — tangled up in his seatbelt and covered in a sheet to avoid shards of glass — waited in shock inside the mangled wreck.

The onetime lead singer for the now defunct rock and country band Bishop Gunn has been arrested in Louisiana on drug and traffic charges, authorities said.

Conservative talk radio host Rush Limbaugh has been buried in a private cemetery in St. Louis, his family announced Friday.

From reggaeton to Hollywood: Nicky Jam dreams of his star

As a musician, Nicky Jam has received accolades including a Latin Grammy and a Billboard Music Award, but nothing would make the reggaeton star happier than having a star with his name in the Hollywood Walk of Fame.

Prince Harry, who decamped from England to Southern California last year, rapped the theme song to the 1990s sitcom "The Fresh Prince of Bel-Air" during a late-night talk show appearance in which he said he didn't walk away from his royal duties.

Maren Morris and Chris Stapleton are the leading nominees for the Academy of Country Music Awards, but only Stapleton joined the all-male ballot for the top prize of entertainer of the year.

Lady Gaga's dog walker was shot and two of the singer's French bulldogs were stolen in Hollywood during an armed robbery, police said. The singer is offering a $500,000 reward.

both for itself and for its most prolific users, whether those are businesses, celebrities or regular people.

'Blinding Lights' and more hits the Grammys left in the dark

The wattage in The Weeknd's "Blinding Lights" wasn't strong enough to compete at the Grammys – but the song isn't the only electrifying No. 1 hit that the Recording Academy snubbed.

Caster Semenya is going to the European Court of Human Rights to challenge "discriminatory" rules that prohibit her from competing in certain track events because of her high natural testosterone, her lawyers said Thursday.

The government dropped drunken driving and reckless driving charges against Bruce Springsteen on Wednesday stemming from an incident in November, admitting that the rocker's blood-alcohol level was so low that it didn't warrant the charges.

The Los Angeles County sheriff on Wednesday characterized the crash that seriously injured Tiger Woods as "purely an accident" and appeared to rule out any potential criminal charges even as authorities were still investigating.