Total closeout failure: How the Wolves gave away another game

These are the losses that sting — that can quickly become losing streaks that send seasons spiraling out of control.

Some might say the Timberwolves, winners of just three of their first 12 games and only one of the most recent 10 in that span, were venturing into that territory even before Wednesday's debacle of a finish against an utterly average and shorthanded Orlando team that had lost its previous six games.

But the circumstances of this 97-96 loss at Target Center will test a team in new ways.

Last year's Wolves suffered a similar gut punch of a loss: when Chris Paul used an untucked jersey to steal a point, when Karl-Anthony Towns accidentally made a free throw he wanted to miss, letting the Thunder improbably tie the game and win in overtime. Minnesota was 10-10 entering that game. They were 10-19 before they won again, and 19-45 when the season was halted.

*Malik Beasley made a three-pointer with 6:33 left to give the Wolves a 91-78 lead. But they didn't score again until 1:24 remained — a span of more than 5 minutes that let Orlando claw back within 93-89. The stretch underscored again the offensive challenges for the Wolves so far this season whenever Karl-Anthony Towns — out after testing positive for COVID last week — is not on the floor.

*Still, the Wolves led 96-91 after a nice Jordan McLaughlin pass set up Naz Reid for a dunk with 50.1 seconds left. They were basically in the territory when one defensive stop would mean a win, and the defense had been an asset most of the night. But on the next Magic possession, two Wolves players chased James Ennis III under the basket, leaving Cole Anthony wide open for a three that he drained. That's a big no-no. Give up two but never three in that situation.

*It only got worse. Beasley missed a shot on the next Wolves possession, and Minnesota actually got a break when Reid wasn't called for a foul after clobbering Aaron Gordon while going for the rebound — which could have given the Magic two free throws and a chance to tie.

*Jarrett Culver and Jared Vanderbilt entered the game for the smaller and more defense-challenged McLaughlin and D'Angelo Russell to defend the next Magic possession. But Vanderbilt and Reid looked like they had a miscommunication that left Gordon wide open for a three ... that he missed. That was break number two.

*Vanderbilt missed the first free throw by a lot. Wolves coaches frantically tried to set the defense in case of a second miss. Orlando didn't have any timeouts, meaning as soon as a miss hit any player, the clock would start — not enough time for an intentional miss, as was correctly asserted on the broadcast, but it was still going to be tough for Orlando to get up a good shot.

Vanderbilt missed the second free throw. Beasley perhaps wasn't in the right position. The ball was tipped to Anthony, who raced up the court with a head of steam while being guarded by Beasley. His buzzer-beating three — desperate, but a better look than Orlando should have had given the game situation — swished through at the buzzer. 97-96.

A bad offensive stretch. Defensive lapses when it mattered most. A coaching mistake. Total closeout failure. Add it up and it's a 3-10 record — a third consecutive loss in a season that has already had a seven-game losing streak.

Read the postgame quotes assembled by the Star Tribune's Kent Youngblood and you can feel a team searching for answers.

"I thought we started making things up defensively, in terms of, 'Let's switch this as opposed to stick to our solid game plan," head coach Ryan Saunders said. "Can't do that. That's not a recipe for winning."

How do the Wolves avoid these sorts of losses? "I wish I knew," Russell said. "I'm giving it my all. I'm attacking this with full effort."

No. 1 overall pick Anthony Edwards, who had eight points on 3 of 14 shooting with no rebounds or assists in 23 minutes — but was a plus-13 in the game and wasn't on the floor during the crunch time meltdown — said simply:

"All I can say is I think we gave the game away." 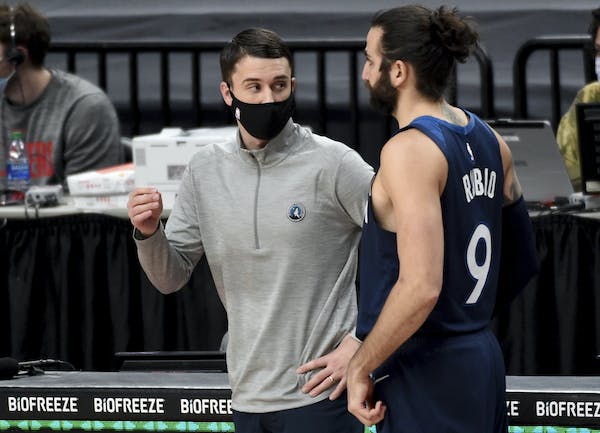 Souhan: Let's be clear. The problem with the Wolves is not Ryan Saunders

In a normal season, the Wolves' 3-9 record might be justification for making changes. In 2021, this would be the wrong time to bow to fan anger and fire Saunders