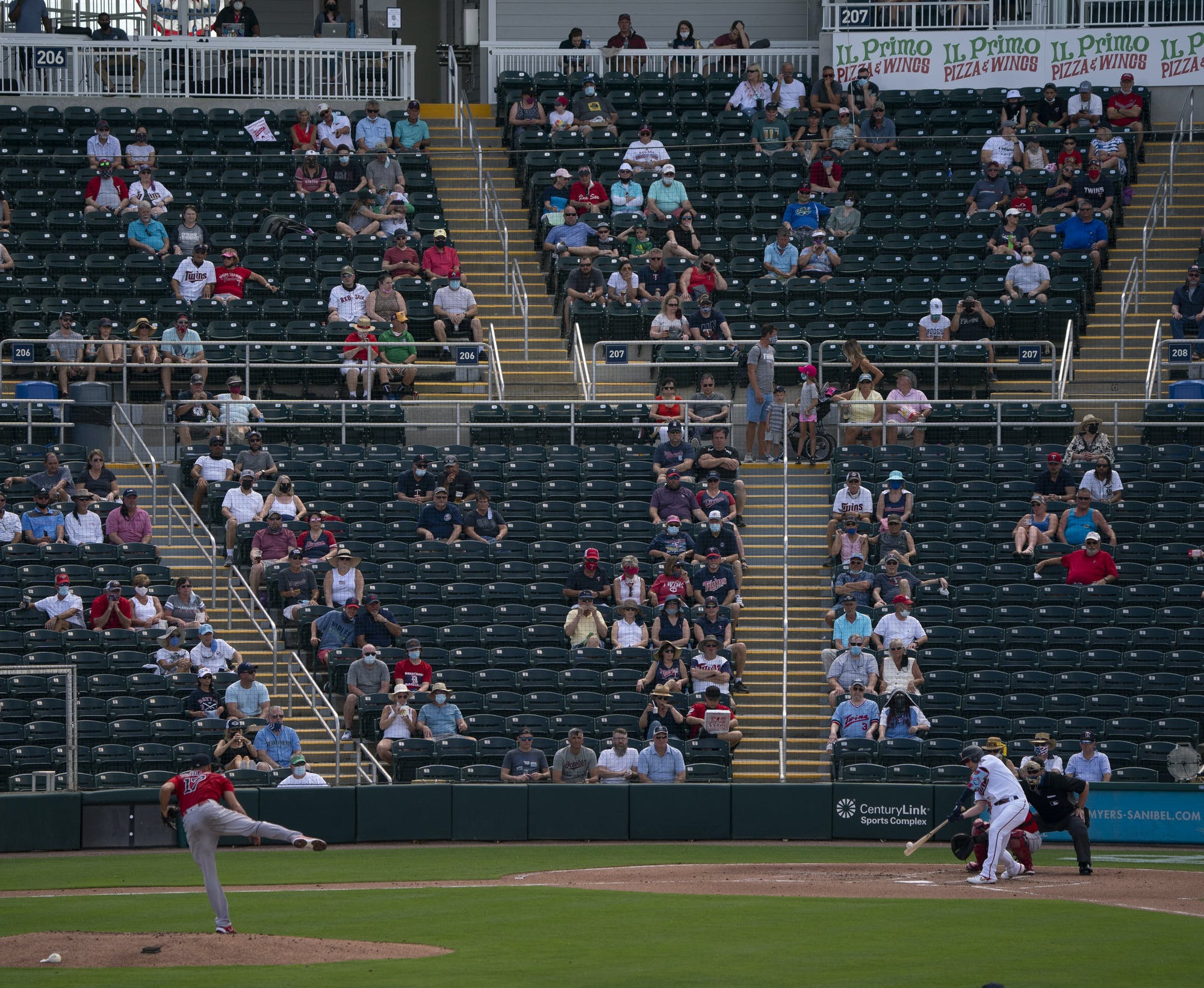 Miguel Sano's bases-loaded double drove in two runs to provide a key hit in a 7-6 victory in front of 2,154 fans — the first time the Twins have played in front of paying customers in nearly a year.

A small chip in his bone bothered him throughout the shortened season, especially when he hit lefthanded.

For your confusion: Twins outfielders Broxton and Buxton

Keon Broxton and Byron Keion Buxton, the home run-robbing pair, are now on the same team, with Broxton trying to back up Buxton. Got all that?

The Twins topped the Red Sox 7-6 on Sunday in the first game of the Grapefruit League season.

They will all be seven complete innings, although an inning can end without three outs.

After an impressive rookie season, the righthander will be joined by new pair of fellow Dominicans.

Twins reliever Robles a COVID victim without getting sick

The coronavirus pandemic contributed to Hansel Robles' miserable 2020. "It got to me," he said of remaining indoors then worrying about the virus when permitted to leave.

Last season brought a second version of spring training for Twins prospects after COVID-19 disrupted everything in March. The games begin again Sunday in Florida.

Royce Lewis, the overall No. 1 pick in the 2017 draft, slipped on the ice outside his Dallas home last week and tore the anterior cruciate ligament in his right knee.

Sano works and watches to improve his fielding at first base

Watching videos of Joe Mauer, Justin Morneau and Albert Pujols, along with training tips from Fernando Tatis Sr., is helping his adjustment from playing third base.

The team will allow fans to sit in pods during all 14 home games at Hammond Stadium in Fort Myers, Fla.

Twins gather for first full-squad workout of training camp, but not too closely

Manager Rocco Baldelli addresses the socially distanced group, saying "We're missing nothing, so it's up to us now."

Josh Donaldson's first season with the Twins was limited to 28 games He comes to his second Twins camp completely healthy, but wary of declaring himself healed.

The return to in-person attendance is going to be a fascinating question in 2021. Both for fans and for Minnesota Gov. Tim Walz, who will be the one making the call on the team's proposals.

The 35-year-old major league veteran has played for the Tigers, Angels, Mariners and Rangers.

Podcast: When can I see a Twins game at Target Field?

The Twins wants 10,000 fans at Target Field on Opening Day. Is that realistic? What hurdles are in place? And most importantly: When can fans expect to safely see games in person?

Reliever Duffey among the fortunate during Houston's cold nightmare

Making sure his extended family stayed safe meant Tyler Duffey skipped an earlier flight to Fort Myers because of the extreme weather in Texas.