At 11 p.m. on a recent Saturday, Lindy Frasl put the finishing touches on the third ice-fishing wheelhouse he has built. At 20 feet, this one was bigger than the other two, but similarly outfitted, with four bunks, a TV, bathroom and small kitchen.

Five hours later, Frasl, of Brainerd, was en route to Upper Red Lake to fish for walleyes, joining there a few thousand other ice anglers.

"Upper Red is unique because it's a big basin and there's no underwater structure in any one location that holds fish," Frasl said. "I don't stay in one spot longer than a day. I move to find fish."

"Center Bar" has been an Upper Red walleye hot spot this winter. According to the Department of Natural Resources (DNR), a thousand or more anglers have been camped there at times, many in wheelhouses. Others have fished out of portable shelters or "skid" houses, which are built on skis, or skids.

Most of these anglers have been intent on catching walleyes. But others basked in winter fishing's unique social aspects, parking their wheelhouses on the ice alongside those of friends, before firing up grills and tossing Frisbees while their kids played in the snow.

The hundreds of thousands of avid anglers who drive onto Minnesota lakes in winter are one reason fishing-license sales here have remained relatively stable, or even increased, while license sales in many other states have declined.

But the increased popularity of winter angling in the past decade or more is placing unprecedented pressure on some of Minnesota's most productive walleye lakes, among them Upper Red, Lake of the Woods and Mille Lacs.

Last winter, for example, Mille Lacs registered more than 3 million angler hours of pressure, a record, according to DNR estimates. Always popular as a winter fishing destination despite restrictions limiting cold-weather anglers to a single walleye that falls within a narrow harvest slot, Mille Lacs experienced higher angler volume last winter in part because of poor access conditions on Upper Red, because of lake slush.

"This winter it's different," said Tom Heinrich, DNR fisheries area supervisor at Mille Lacs. "Mille Lacs ice has been a little slower to develop, so many anglers with wheelhouses have driven right by us and headed to Upper Red or Lake of the Woods."

A solid six-hour drive from the Twin Cities, Lake of the Woods has nevertheless developed into a cold-weather fishing destination like no other. Last winter the lake received record fishing pressure that exceeded its previous high mark by 34 %.

Attempting to limit possible adverse effects on fisheries of so much angler interest, the DNR constantly monitors the state's large walleye lakes through fall gill-netting assessments and creel surveys.

"The good news," said DNR fisheries section chief Brad Parsons, "is that on these large lakes we have a lot of data, so we can make regulatory changes if needed based on good information."

Angling pressure on the Minnesota side of Lake of the Woods in winter is approximately four times what the lake sees in summer, said Henry Drewes, DNR northwest regional fisheries supervisor stationed in Bemidji.

On Upper Red, the ratio is about 7-1, favoring ice angling, Drewes said.

"Remarkably, however," Drewes said, "harvests in the two seasons, summer and winter, are similar, despite the higher winter pressure."

The first year that Lake of the Woods had 1 million angler hours of winter pressure was 2001. In 2017, 2 million hours were registered. Last year, the record — for now — jumped to 2.7 million hours.

Wheelhouses, some with $30,000 price tags, that anglers pull behind pickups or SUVs, aren't the only development driving the increases.

Local resorts plow and maintain more and better ice roads than in years past. Improved "flashers" and other electronic gizmos, including underwater cameras, help winter anglers find fish quicker and stay on them longer. Handheld and other GPS gadgets guide or return anglers to hot spots. And social media pulses with information about which baits to use and water depths to fish.

To sustain pressured fisheries, the DNR sometimes tweaks harvest regulations. In March 2019, the agency lowered the Lake of the Woods wintertime combined walleye and sauger limit from eight to six, while retaining a 19½- to 28-inch protected slot for up to four walleyes.

On Upper Red, meanwhile, new regulations begun in November lowered the walleye limit from four to three, with one allowed over 17 inches.

"The increased winter pressure has been a challenge for fisheries managers," Drewes said. "Fortunately, on Lake of the Woods and Red Lake, as well as other lakes in our region, we have strong citizen-input groups and excellent support from resorts and other commercial interests who know that if we don't protect the integrity of the fisheries, things could go downhill."

Frasl, meanwhile, already is thinking about building his next wheelhouse. Only a few weeks old, his most recent rendition has drawn interest from a couple who recently tried ice fishing for the first time.

"They're excited," he said. 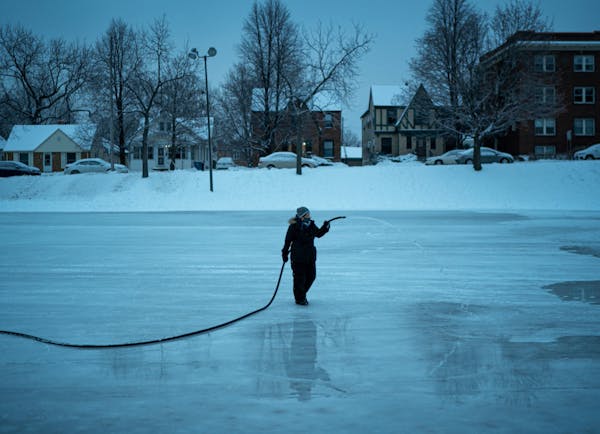 The art (and science) of making outdoor ice rinks in Minnesota

Outdoors columnist and editor Dennis Anderson joined the Star Tribune in 1993 after serving in the same positions at the St. Paul Pioneer Press for 13 years. His column topics vary widely, and include canoeing, fishing, hunting, adventure travel and conservation of the environment.