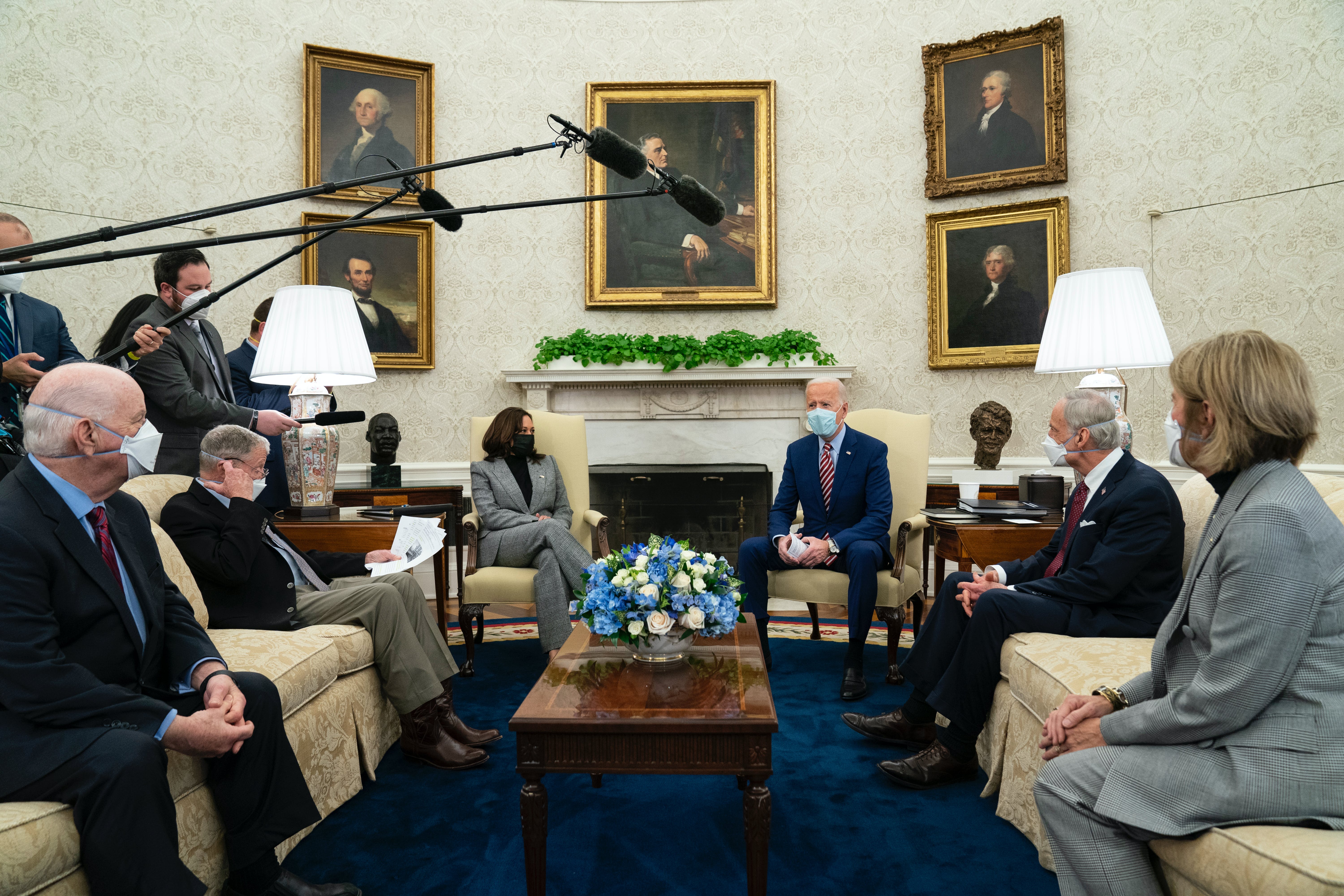 Looking beyond the $1.9 trillion COVID relief bill, President Joe Biden and lawmakers are laying the groundwork for another top legislative priority — a long-sought boost to the nation's roads, bridges and other infrastructure that could run into Republican resistance to a hefty price tag.

The U.S. is getting a third vaccine to prevent COVID-19, as the Food and Drug Administration on Saturday cleared a Johnson & Johnson shot that works with just one dose instead of two.

Many Republican lawmakers have criticized governors' emergency restrictions since the start of the coronavirus outbreak. Now that most legislatures are back in session, a new type of pushback is taking root: misinformation.

The Latest on the Golden Globe ceremony (all times local):

With homebound nominees appearing by remote video and hosts Tina Fey and Amy Poehler on different sides of the country, a very socially distanced 78th Golden Globe Awards trudged on in the midst of the pandemic and amid a storm of criticism, with a bounty of awards for streaming services, pleas for inclusivity, and a posthumous award for Chadwick Boseman.

The glam was back at the Golden Globes, albeit at a distance

Glam was back for the Golden Globes virtual, bicoastal awards night Sunday as nominees Zoomed in from around the world and, for Leslie Odom Jr., from his front porch in Los Angeles not far from the action in Beverly Hills.

Irv Cross, the former NFL defensive back who became the first Black man to work full-time as a sports analyst on national television, died Sunday. He was 81.

New York Gov. Andrew Cuomo acknowledged for the first time Sunday that some of his behavior with women "may have been insensitive or too personal," and said he would cooperate with a sexual harassment investigation led by the state's attorney general.

Prince Harry says the process of separating from royal life has been very difficult for him and his wife, Meghan.

Brian Delaney checked his ticket, found his seats and then sat down for a minute in the sunshine. It wasn't a typical late February day in Arizona — a little cool, a little breezy — but Delaney didn't complain a bit.

Taking the stage for the first time since leaving office, former President Donald Trump on Sunday called for GOP unity, even as he exacerbated intraparty divisions by attacking fellow Republicans and promoting lies about the election in a speech that made clear he intends to remain a dominant political force.

With the floodgates set to open on another round of unemployment aid, states are being hammered with a new wave of fraud as they scramble to update security systems and block scammers who already have siphoned billions of dollars from pandemic-related jobless programs.

Nearly 4 million doses of the newest COVID-19 vaccine will be shipped Sunday night, and will begin to be delivered to states for injections starting on Tuesday.

Donald Trump clung to his core election falsehoods in his first post-presidential speech, wrongly blamed wind power for the catastrophic power failures in Texas and revived a variety of the baseless claims that saturated his time in office, on immigration, the economy and more.

Margaret Maron, a prolific North Carolina-based mystery writer whose book series won her major awards and plaudits in the genre, has died at age 82, a family member said on Sunday.

MIAMI – When a major hurricane, extreme heat or other climate threat devastates an ocean's lifeblood, its recovery could be aided by the presence of…

US still open to Iran nuclear talks after Iran's rejection

The Biden administration said Sunday it remains open to talks with Iran over the 2015 nuclear deal despite Tehran's rejection of an EU invitation to join a meeting with the U.S. and the other original participants in the agreement.

A not-so-distant recovery for movie theaters could be glimpsed Sunday, as Warner Bros.' live-action-animation hybrid "Tom & Jerry" debuted with $13.7 million in ticket sales, the best domestic opening of the year.