Ice fishing contests melting away because of Minnesota's pandemic restrictions

Most winters, thousands of people converge on Minnesota's frozen lakes to celebrate the season, drop a line through a hole in the ice and maybe, just maybe, land a prizewinning fish.

But this winter, amid a global pandemic that shows no sign of easing up soon, organizers of many ice-fishing contests across the state are recasting plans.

Some have already canceled events while others have turned to virtual competitions, where participants can fish numerous lakes. Still others are scaling back contests in hopes of hosting modified events that meet social distancing guidelines set by the state.

"Fish contests are a big deal in Minnesota," said Jon Hansen, fisheries program consultant for the Minnesota Department of Natural Resources (DNR). They give people a reason to be outdoors and provide an economic boost to communities and charities, he said.

In a typical year, the DNR receives close to 100 applications for the permits required for ice-fishing contests that draw more than 150 participants, Hansen said. But as COVID-19 surged in the fall and restrictions on social gatherings tightened, DNR officials didn't know whether they would be able to issue permits for contests this winter.

Amid the uncertainty, the DNR has received only 50 applications since August, and 20 of those have since been withdrawn because the event has been canceled or the format changed. Virtual competitions, for example, don't require a permit, Hansen said.

Organizers of one of the state's largest ice-fishing contests — the Brainerd Jaycees Ice Fishing Extravaganza — are among those who decided to go virtual.

Normally, the event, which dates to 1991, attracts 8,000 to 13,400 people for three hours of ice-fishing competition on Gull Lake. With vendors peddling mini doughnuts and other treats, the festive setting more closely resembles a county fair, but on ice, drawing media attention from across the country and giving the local community a hefty economic boost.

"Everyone gets a kick walking on a frozen lake if they've never have before," said Frank Soukup, marketing director for Cote Family Destinations, which manages Grand View Lodge overlooking Gull Lake.

In this year's virtual contest, scheduled for Jan. 30, participants can fish any Minnesota lake and will measure their catch by its length, rather than weight. They will then submit a photo of the fish so it can be entered in competition.

"People will have to take photos while they measure on a bump board," explained Angie Nelson, Jaycees volunteer.

The virtual event won't fill up local bars, restaurants and lodging as usual, but Nelson and others hope a few hundred people will still head to the Brainerd area for a weekend getaway and that even more anglers will enter the competition, which usually raises $100,000 to $250,000 for local charities.

"We won't raise that this year," Nelson said. "We have so many charities that have suffered so much during the past year, so anything we can do to support them and raise money helps."

With news last week that Walz was loosening restrictions on bars and restaurants and other venues amid continued declines in COVID-19 infections and hospitalizations, it raised hopes that some ice-fishing contests that appeared to be in jeopardy may yet still be held this season if organizations choose to apply for permits.

The DNR will review permits to ensure that social distancing guidelines can be met, including capacity limits of 250 in controlled areas, Hansen said.

"At the end of the day, the idea is to make sure not too many people come together in one place," Hansen said.

Greg Erickson, tournament director for one of the largest ice-fishing contests on Lake Mille Lacs, said his group is trying to do just that for its February event.

The Fishing for Ducks contest, organized by the Garrison Ducks Unlimited Wildlife Chapter, usually attracts 4,000 to 5,000 people for a three-hour contest that raises $150,000 or more for waterfowl and wetland conservation, Erickson said.

But this year's event likely will have to be more spread out, he said.

"But nothing is for sure until we get the permit," Erickson said, declining to discuss specifics until the DNR approves the group's application. "Obviously it will look different from normal."

Still, people are eager to compete and resume the winter tradition.

"People are anxious to do anything after all these months," Erickson said. 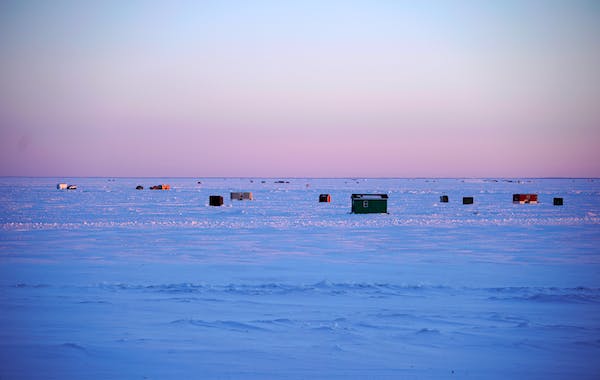 Mary Lynn Smith is a general assignment reporter for the Star Tribune. She previously covered St. Paul City Hall and Ramsey County. Before that, she worked in Duluth where she covered local and state government and business. She frequently has written about the outdoors.

Sports on TV and radio

Twins getting Happ is a boring move . . . the kind that wins titles