The Twins signed a veteran middle-of-the-rotation pitcher to a one-year contract on Wednesday and social media lost its collective mind.

And by that, I mean people reacted ... calmly? Blandly? Almost as if they were being lulled to sleep?

In an age where most transactions earn instant grades and fiery reactions, the Twins paying $8 million for one year of 38-year-old lefty J.A. Happ was instead met with a collective shoulder shrug — even from a fan base desperate for some offseason moves.

Here is just one beautiful example of the several I saw roll across my Twitter timeline in the late afternoon and early evening:

The Twins didn't overpay for Happ, given that he would have made $17 million in 2020 in a normal season and was slated to make the same in 2021 had the Yankees exercised a team option on his contract.

But they can't be accused of bargain shopping, exactly, either. He immediately became their fourth-highest paid player in 2021 and their second-most expensive starter behind Michael Pineda ($10 million).

But even if he doesn't approach that high-level ceiling for the Twins, his floor is still acceptable. Happ is durable, having made at least 25 starts every year from 2014-19 and making nine in last year's shortened 60-game season.

He'll log a lot of 5- and 6-inning outings, giving up a couple of runs, not many hits, striking out almost a batter per inning. His control isn't impeccable, but he won't walk more than a couple guys a game.

Happ is an utterly boring, plug-and-play No. 3 or No. 4 starter. But those are exactly the kinds of signings that sustain good teams and tend to lead to division titles.

The signing gives the Twins a likely first four in the rotation of Kenta Maeda, Jose Berrios, Pineda and Happ. Randy Dobnak is in the mix, as are Devin Smeltzer and Lewis Thorpe.

It's not the sort of move that should stop the Twins from going after even more starting pitching — especially if they have designs on the World Series and not just another AL Central crown or playoff berth.

But Happ is a capable, accomplished veteran — probably exceptional only in his ability to make Twins fans neither happy nor mad about his arrival. 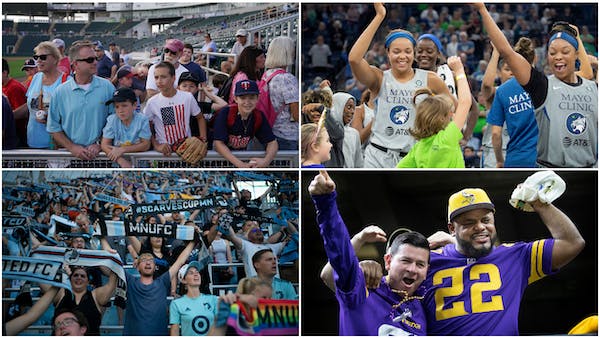 Your thoughts: If you could start over, would you root for Minnesota teams?

'If you love someone, tell them. . . . And if that loved one cheers for Minnesota teams tell them it's not worth it.' How's that for drama?

Wild's Foligno much more than a role player now